Political apathy and disengagement with politics is one of the challenges faced by numerous modern liberal democracies. In the UK many find the political process distant and political parties unrepresentative. Scandal, corruption and outright fraud have to some degree tainted the British political system despite its strength as an institution.

TickBox is the student startup that hopes to rescue British politics. It hopes to rejuvenate politics for the younger generation and also make politics more transparent and accessible. Its founder Matt Morley has even postponed his Exeter history degree to help make the project a success.

The thinking behind TickBox is simple, as Sam McShane, Head of Elections explains; “TickBox is a tool that guides people through jargon of everyday politics so everyone understands the power of their vote, and understands exactly what they’re voting for.”

Already, TickBox has made waves in the UK political scene. It recently held an extensive campaign during the Scottish Referendum and during the European Elections it gained coverage in the Independent, Huffington Post and Telegraph. The European elections were in many ways a defining moment for the business because it confirmed there was a real demand for an impartial surveying platform full of political information. The website saw over 200, 000 page views which equated to just over 40,000 unique users during the May elections. 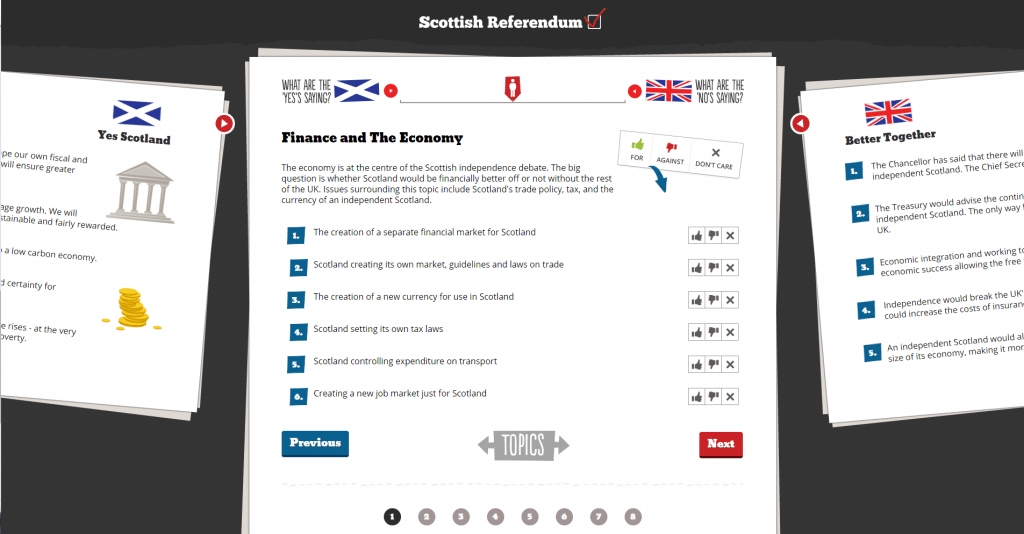 It appears TickBox is keen to establish itself as a force for good and Matt has certainly helped drive forward the project’s development. Red Brick asked Matt some more direct questions about himself and the future of Tickbox:

1. So what motivated you to launch your own business?

“It was more we wanted to solve a problem than wanting to start a business. I was in my dorm room and it was the city council elections and my friends weren’t voting. I’m not a major political advocate, you wouldn’t find me at a protest or rally, but the lack of information was hindering a lot of people and so I started a mini project that aimed to collate information and then share it. I didn’t originally view TickBox as a business.”

“The thinking was if we did it for just this small part of the country couldn’t we ultimately put every election online, with details of every candidate, every manifesto and put it in your pocket? Ultimately this became the TickBox mission.”

2. Why, in your opinion, is political engagement important?

“Politics and voting are fundamentally important. It is important as it affects everything we do and the shape of our society. TickBox takes the approach that politics is ultimately the belief in something, and so if you ask students questions such as ‘should Britain have nuclear weapons?’ they will have an opinion on it. What they don’t like is the format that is currently used because it is outdated and backward.”

“TickBox comes from a different angle, we don’t shout about voting and democracy, we know that students care about stuff and that is our angle. That is why we ask; ‘what do you stand for?’no one likes to be lectured and talked at; we like to offer well researched and unbiased information.” 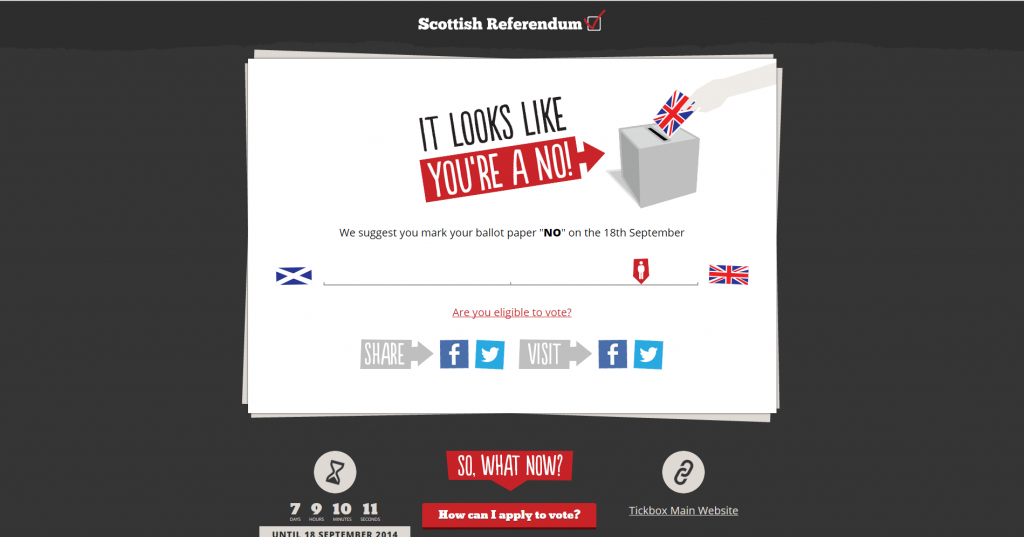 3. Has your time at Exeter influenced the business and how has uni helped you?

“The university was very supportive and helpful. We have a support unit called ignite which is run by the student’s guild; they take ideas like mine and basically try and turn them into businesses. The innovation centre run by SetSquared has also contributed to the development of the business.”

4. Has it been hard balancing your History degree with running a business?

“It started off taking just 5-10% of my time but in the last year it took up more of my time and I decide this was what I wanted to do. As a result I decided to suspend my degree, in the run up to the general election, and the university have been supportive through this period.” 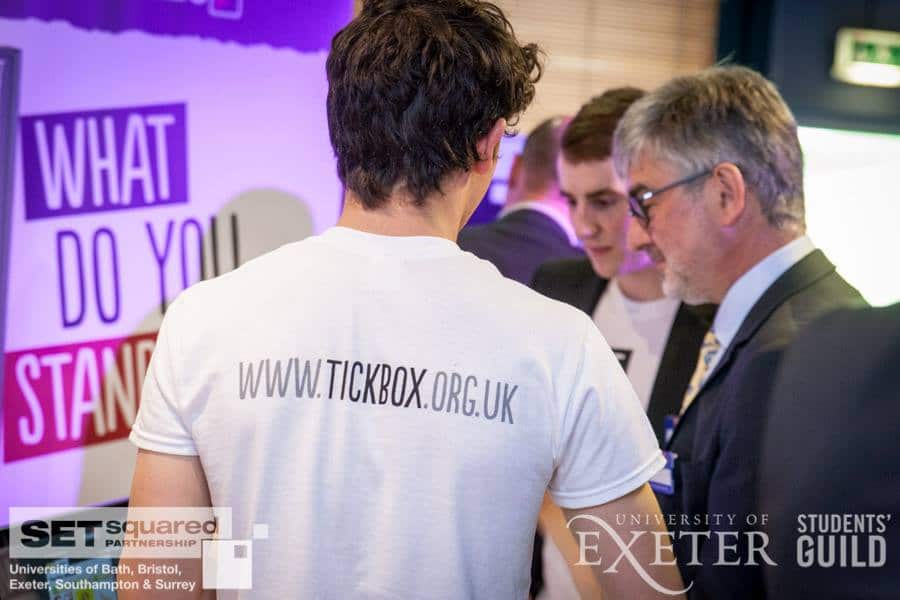 5. So how does the business actually make money?

“We have three revenue streams. Revenue stream one is based on website analytics, so we can look anonymously and gain valuable data. Revenue stream 2 is the updating of candidate profiles with additional links, there is no barrier to becoming listed as a candidate but additional information and effectively web space can be purchased. Revenue stream 3 is derived from the subscriptions for our platforms.”

6. TickBox launched in February 2014. What have you learnt in your first few months of trading?

“You have to be committed and determined. You will get all sorts thrown at you and you have to get your head down and work through it. I work with some of my closest friends on the project and that has helped but you have to work hard and that is what I have learnt.”

“It is the best job in the world because you never have to do the same thing and you get to meet amazing people. As an entrepreneur there is no security or continuity and as a result you have to keep innovating and pushing forward.” 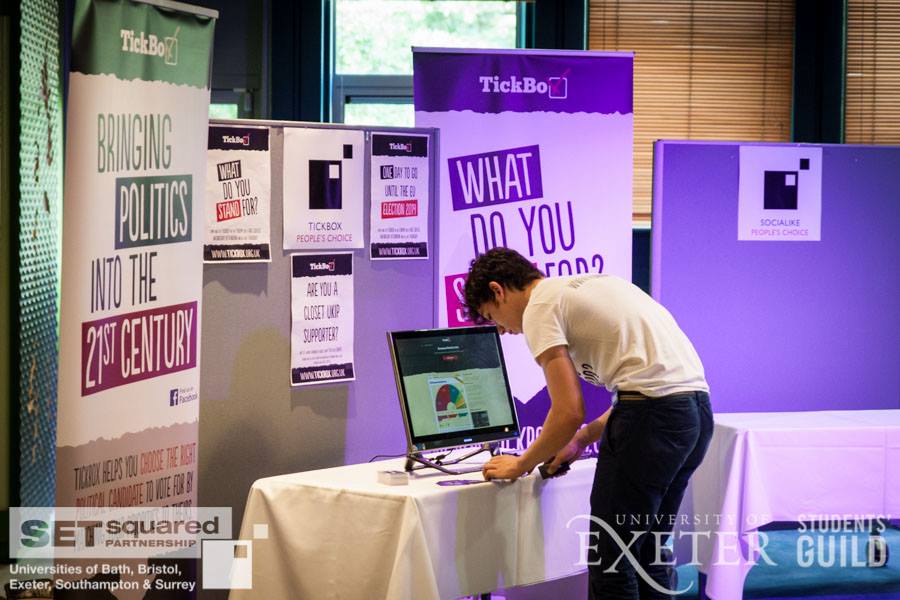 7. Have you had any major clients or significant interest?

“We have worked with and had interest from charities, universities, think tanks and the Cabinet Office. We would like to be in a position where our platform powers university, council and even general elections. The continuity would help people engage with politics and it might help make politics less alien. We hope to have an impact on 90 to 100, 000 students.”

“We also recently turned down private investment to look into crowd funding options. We are now looking to grow via a CrowdCube and we are due to open operations in London as well as triple the existing team.” 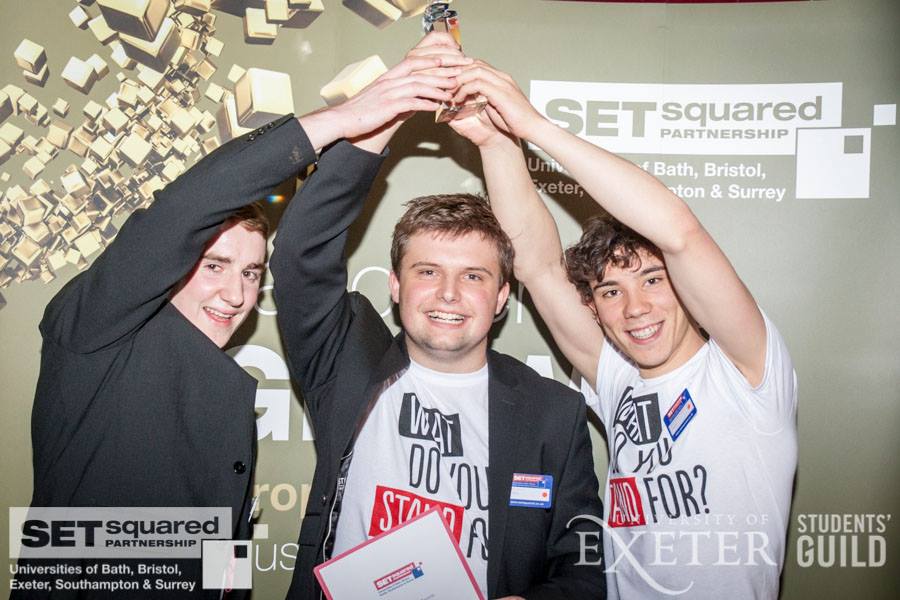 8. What does the future hold for you and TickBox?

“I wish to live rich and die poor. I do aim to become wealthy in terms of experience and personal wealth. But I also aim to redistribute wealth and the companies’ wealth. Indeed 10% of our profits already go back to socially valuable projects in the area. We are a startup of 6 people but we have always said we want a nice way of doing business.”

“Over the coming years we estimate that we will have to upload information on around 17, 500 candidates for various future elections, so we have a lot of work to do! We also want to expand into schools and allow teachers to create their own elections.”

“Another area we want to develop is pledge fulfilment. In effect we want to provide a measure of a MPs success and make politics more transparent. The way to achieve this will be to provide a pledge tracker for those who voted for a candidate. TickBox would effectively become a bridge, if politicians do something wrong we will let the people know but if they do something right we will also let the people know so that bad news doesn’t dominate and damage politics.”

“This is important because an MP can do 20 good actions and they can share this with their small following but the moment one national paper says that they have done one bad thing then hundreds of thousands know all about it. This is incredibly damaging to politics.”

“Long term we would like to grow into a global organisation that covers elections on a global scale. This would mean covering the small parish council election to the Indian national election.”