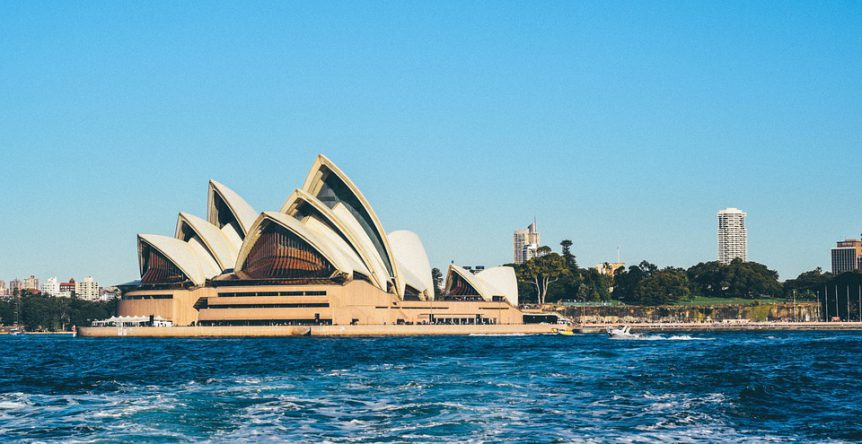 In this article, we take a look at some of the major differences between UK and Australian university marketing departments. From increased budgets and use of market research, to the importance of attracting international students, by examining these differences we’ve gleaned some interesting lessons from down under. We’ve also taken a look at some of the best higher education campaigns to come out of the country. Ready to be inspired?

(And envious – the average November temperature is 20°C).

To find out more about the first two main differences, we spoke with Tania Rhodes-Taylor, Vice-Principal (External Relations) at The University of Sydney. Formerly Director of Marketing and Communications at Queen Mary University of London, Tania has experience of both UK and Australian university marketing departments.

Tania started off by highlighting that she hasn’t noticed a huge difference between UK and Australian marketing teams. “In both countries the teams are made up of specialists and leaders in their fields with a passion for promoting the work of their universities. Marketing is a very transferable skill and most marketeers could find a role in any sector, but those who choose to work in universities do it because they are inspired by the research we undertake and the students we teach. It sounds idealistic, but they really want to make a positive contribution and supporting our academic colleagues in communicating about their work and the impact of that is a tangible way of doing that,” she says.

In her experience, the main difference was how the teams are resourced and supported. “Of course, there are exceptions, but overall universities in Australia seem to be further along in their understanding of the positive contribution that effective marketing and communications can make to the reputation of our institutions and invest accordingly. By UK standards our teams are well resourced, but because of this enhanced understanding the demand on them is such that, like the UK, we have to juggle priorities but for different reasons. It’s a good problem to have.”

In 2016 it was reported that Australian universities spent AU$300 million on campaigns, slogans and sponsorship in a bid to compete effectively for students, staff and research partners. The spending was $30m more, a rise of 11%, than in 2015. Some institutes were reported to have allocated in excess of AU$10 million per annum on advertising and promotions.

Action: UK university marketing departments might not be able to magic more money out of thin air, but they could make the case for an increased budget where relevant. As discussed later on in the article, this is particularly important when it comes to attracting international students who may be unfamiliar with most institutes and require marketing efforts to learn more. Justifying a bigger budget may be a long game, in which university marketing departments start comprehensively collating data which proves the success of their efforts.

#2 Widespread use of market research

Tania says this attitude also extends towards market research too. “Whilst many UK universities have started to use market research much more effectively in recent years, the use of it in Australia is much more embedded. It’s pretty unusual to find an Australian university that isn’t systematically tracking its reputation with key audiences or using marketing research to inform the development of new offerings or measure the implementation and impact of our strategies,” she says.

Action: Like requesting a budget increase, showing the need for a more widespread use of market research may be a long game. Nevertheless, UK marketing departments could start to highlight key areas where they would benefit from delving deeper. Once the results from this have been proven, it will assist in making the case for further market research in the future.

Education is now Australia’s third largest export sector and the country’s predominant service export overall. The economic impact of international education rose by 22% in 2017 to reach AUS$32.2 billion. The upshot? International student recruitment is taken very seriously in Australia. And as such, it’s on track to overtake the UK as the world’s second biggest destination for international students, after the United States. While just three years ago the UK was attracting some 130,000 more overseas students than Australia, Australia has now caught up and is set to overtake.

Following the news of Australia’s rapidly expanding international student numbers, The British Council have said this demonstrated that the UK needs to “look again” at its policies towards overseas students. In terms of post-Brexit strategy, The Times Higher Education reported that the UK has also been urged to learn from Australia’s experience of treating higher education as an export industry and including it in international trade agreements.

Action: We’ve written before about the benefits of international students. But while UK universities and the public support international students studying in the UK – and that should be highlighted in marketing campaigns – ultimately, government policy would also need to reflect this. Unfortunately, Brexit has muddied the waters at present. In an advice document for students on post-Brexit rules and entitlements, the UK Council for International Student Affairs are keen to point out that, while ‘significant changes seem inevitable’, they say ‘this advice and guidance represents our best current interpretation and understanding of government announcements and intentions’. The best action here may be to wait and see what the fallout from Brexit is.

#4 Promotion of culture, climate and friendliness

Australia is home to an impressive 35 top universities, according to Times Higher Education’s World University Rankings 2019, with six of them featuring in the prestigious top 100 rankings. And while this is certainly a focus of marketing them, it’s not the sole focus. According to the BBC, as well as showcasing the country as an English-speaking location with excellent universities, Australian universities are also keen to highlight other attractive features such as the climate and welcoming culture toward overseas students. It’s an approach that appears to be working, with Australia snagging two spots in this year’s Best Student Cities, with Melbourne scoring 3rd followed by Sydney in 9th position (though London did scoop 1st place).

THE BREXIT EFFECT – Download our polling of international students here

A few years ago, the Vice-Chancellor of Monash University, Margaret Gardner, urged Australia higher education to ‘seize the opportunity’ presented by Brexit and Trump. It proved a prudent move; The International Student Survey which is based on 67,000 prospective applicants, found that 39% of EU students thought that Brexit made them less interested in studying in the UK. Why? They felt it would make UK more expensive and ‘less welcoming’ to EU students. And last year’s International Student Survey ranked Australia as the safest and most welcoming country for international students. The UK came 4th, behind the United States.

Action: While waiting for the outcome of Brexit, campaigns centred on the UK – and its various cities and towns – as a destination could prove beneficial. We have a lot to be proud of on this island, from our rich historical heritage to awe-inspiring natural sights. UK universities may also benefit from some ‘damage control’ campaigns to help reassert the country as a welcoming destination for overseas students.

Curious to see what the Australian approach looks like in practice? Here are three of our favourite campaigns from Australian universities.

#1 The University of Sydney – Leadership for Good Starts Here 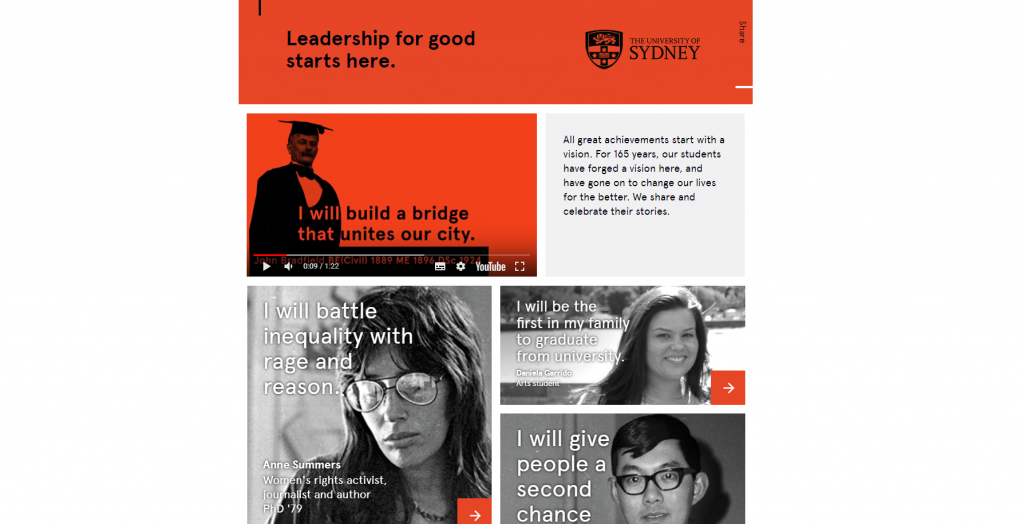 The Leadership for Good Starts Here campaign positions The University of Sydney as the perfect launching pad for students who want to make a difference in the world. Their vision is cemented with an inspiring array of alumni and current students who have done just that. Featuring alumni as diverse as the pioneer of modern heart transplantation, Victor Chang, to women’s rights activist and journalist, Anne Summers, it’s easy to see the appeal of this effective and rousing campaign.

The campaign ran as street posters, cross tracks and bus placements over the city, as well as a short film promoted through social media and a dedicated webpage that tells each story in more detail. This clever campaign managers to highlight the real-world difference made by The University of Sydney alumni and in doing so, it creates a meaningful connection between past and future students.

This bright and bold campaign from Deakin University is attention-grabbing in all the right ways. Shrugging off the widespread use of appropriate red and navy, this colourful campaign is inspired by the Light and Space movement of the 1960s. This unexpected approach mirrors the universities dedication to innovative thinking and open-mindedness.

The ‘Think Young’ slogan highlights the importance of openness and enthusiasm for exploring the new. This allows the university to showcase impressive members of the university who embody this vision, thus giving the campaign real authenticity. When it launched several years ago, this memorable campaign was executed on television, digital video, outdoors and on social media and content channels.

This campaign succinctly manages to tell a full narrative of individual graduates – from their childhood through to their experience at university and beyond – in just 90 seconds. While there are several videos in the campaign, the story of Deng Adut captured the hearts of viewers and it has since received 2.8 million views. It tells the tale of a child soldier in Sudan who arrived as a refugee in Australia before working his way up to becoming a prominent human rights lawyer.

So widespread was this campaign, it even inspired spoofs! While using alumni to bolster marketing efforts is not a new concept, this is a very fresh approach. Instead of focusing entirely on the end result, The University of Western Sydney weaves individual stories into a universally digestible narrative about ambition and overcoming the odds.

There is no denying that Australian university marketing departments enjoy some advantages over their UK counterparts. The budgets are, in many cases, much larger and there appears to be a concrete, prevalent understanding and respect for their efforts towards pushing the university forward. Not only is this reflected in the budgets, but also in terms of tools such as more dedicated use of market research, which allows them to dig deeper and deliver more targeted campaigns. When it comes to these first two issues, UK marketing departments might not be able to immediately increase their budget, but they could certainly make the case for it, which could have an impact down the line. This may include better management of tracking the success of their marketing efforts, as this data can then be used to justify further investment.