Instagram is growing faster than Twitter, Facebook and Pinterest combined and, with the majority of its users of typical university age, it is little wonder it’s becoming a key part of universities’ social media presence.

The image centric nature of Instagram is very appealing to Students’ Unions, as it offers an attractive way to display all sorts of appealing things such as campus architecture, student events and sports games, to name just a few.

Here we take a look at the background of Instagram and further explore why Students’ Unions are choosing to utilise the platform. 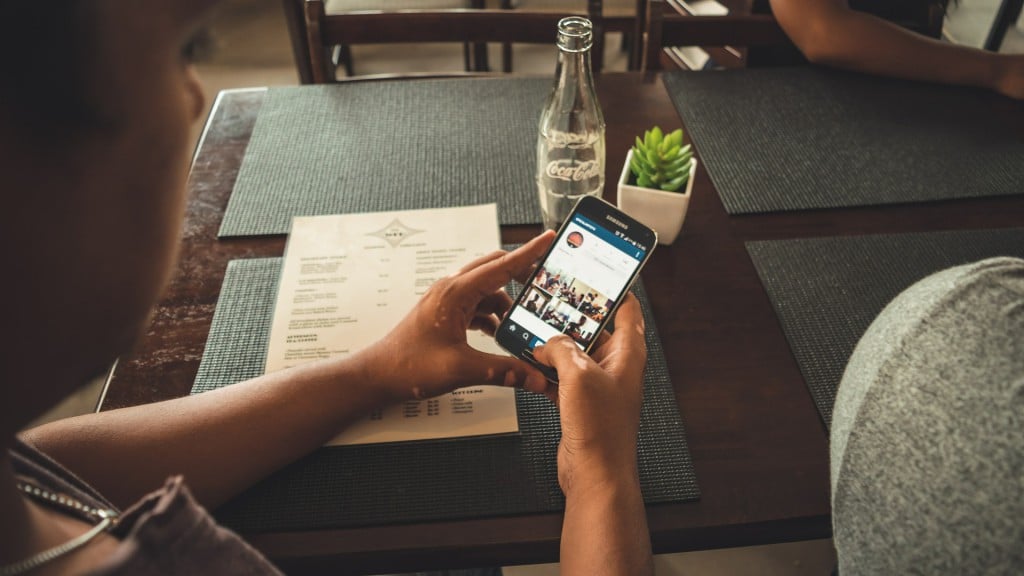 The word is a hybrid of instant camera and telegram, which neatly sums up the service. It allows users to post images that let their followers know what they’re up to in that moment.  This can be done privately, which means images can only be viewed by approved followers, or publically, which means anyone can view them. It makes sense for Students’ Unions to have public accounts to gain maximum exposure.

One of the most distinctive features of Instagram was all photos were limited to a square shape, presumably to mimic the polaroid image. However last year version 7.5 was released allowing users to post images in aspect ratio, which allows for a little more creative freedom. Another distinctive feature is the ability to add filters to the pictures, which offers users a quick way to make their images more visually appealing and interesting.

Instagram has overtaken Facebook and Twitter as the network with the largest population of younger users, making it a worthwhile choice for Students’ Unions. Instagram has said that it has 14 million users in the UK and research firm GlobalWebIndex estimates that 38.4% of them are between 16-24. Though there are no official figures which offer a gender breakdown, independent analysts have suggested that women account for as much as 68% of the site’s users. According to Pew Research Centre data, 55% of Instagram users have at least some higher education, again, making it an ideal platform for Students’ Unions. 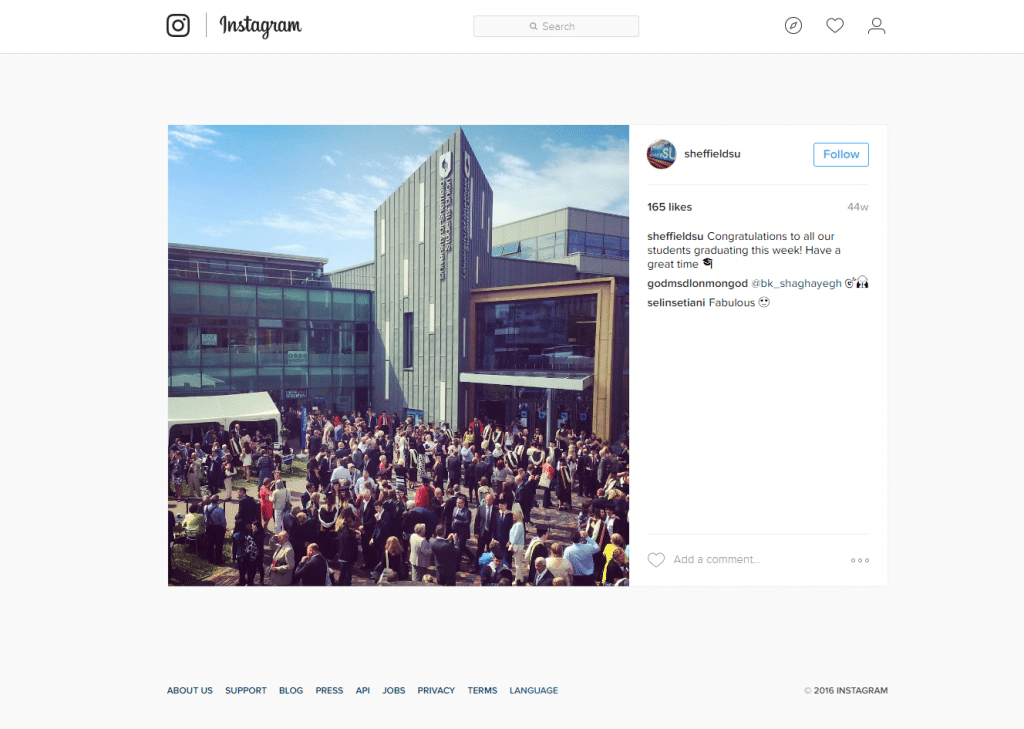 First off, as a predominately visual platform, Instagram lends itself well to showcasing beautiful surroundings. Many universities feature stunning buildings and are surrounded by inspiring architecture; capturing this is a great way to show off the campus. This not only makes current students feel a sense of pride, but prospective students will be intrigued and alumni may get a nice dose of nostalgia. Here is a great example by Sheffield University Student’s Union showing off their modern SU building. More traditionally, we love this shot of the Trent Building at the University of Nottingham. This clever shot by Queen Mary University of London asks the viewer to play ‘Where’s Wally’ and spot their campus. 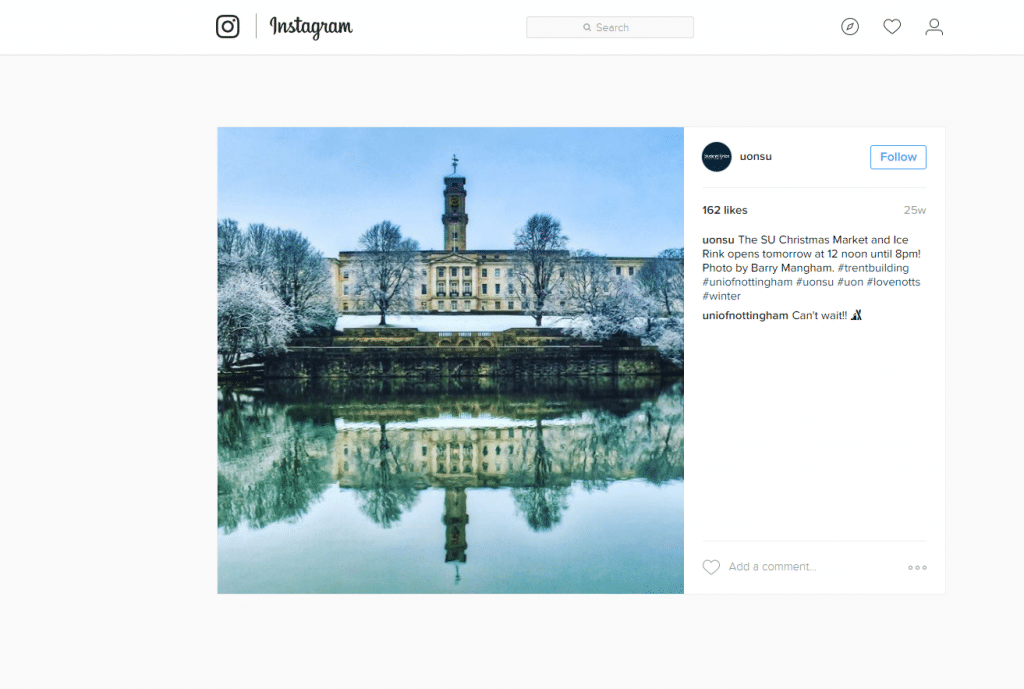 Instagram also offers a chance to showcase events. Whilst it might not be as info-packed as live tweeting the event, sometimes a powerful image paired with a quote makes even more of an impact. That’s not to say that light-hearted approaches don’t work, check out this impressive slow-motion pancake toss from the Huddersfield SU account. The University of Bath Students’ Union showcases a local music event with a snappy, intriguing video. Even small events, such as a competition winner announcement can be creatively conveyed over Instagram, as seen here by Queen Mary University of London SU. 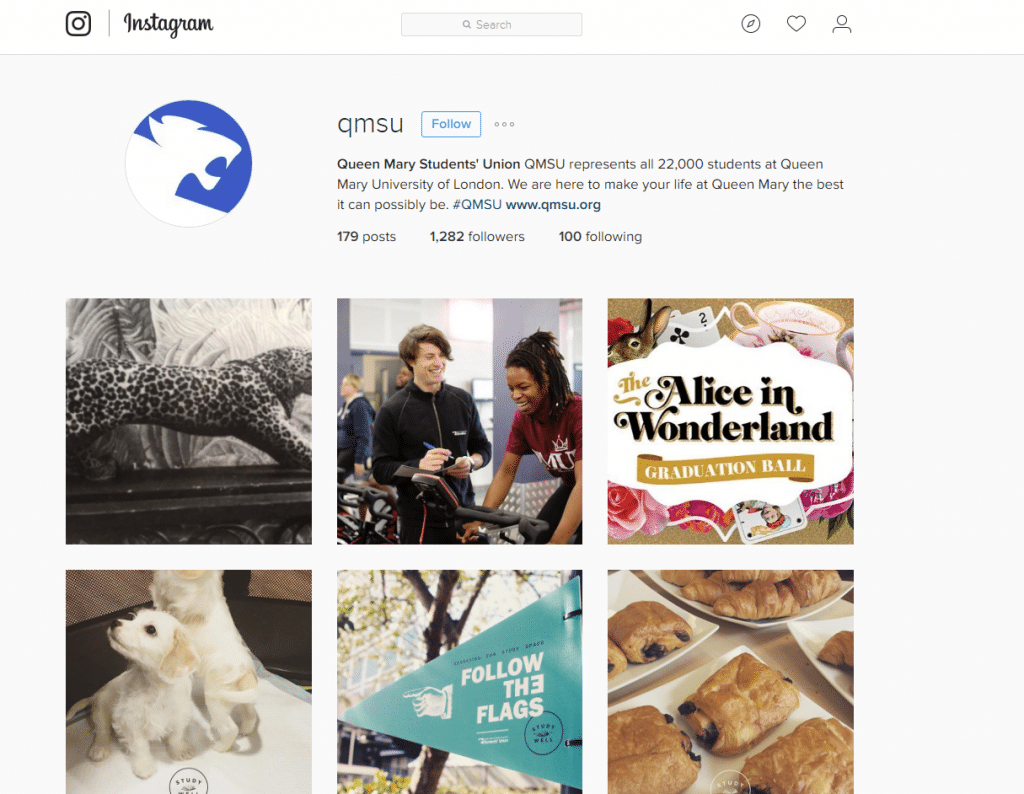 As well as showing off events going on about the university and within the Student’s Union, Instagram can be used to show off student activities. This is really appealing to potential students, because whilst events might be interesting, student life is exciting! You can literally give potential students a snapshot into daily student life. Here is Sheffield SU showing off their Student VS Food challenge, The University of Nottingham SU captures the Hockey Team with their kit off to raise awareness of homophobia in sport, and here LSE SU showcases women’s touch rugby.

Instagram is an appealing choice for Students’ Unions as it attracts the correct demographics and is continuing to grow. Just remember: limit the selfies!